In November 2015, the Eugene City Council passed a Vision Zero Resolution that directed the City Manager to form a Vision Zero task force that includes community stakeholders. The task force and a technical advisory committee were charged with developing a Vision Zero Action Plan to be adopted by the City. Since 2015, these groups and an equity focus group have been working together to develop a five-year Action Plan, which was adopted last month by the City Manager.

“Our community values the safety of all people who use our multimodal transportation system and will take equitable, data-driven actions to eliminate death and life changing injuries by 2035.”- Eugene Vision Zero Action Plan Statement 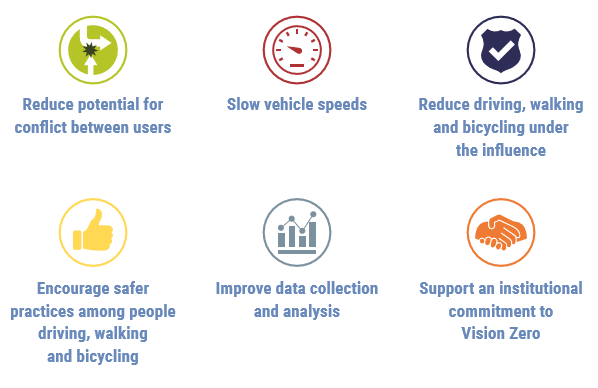 Earlier this week the Eugene City Council held a work session on the Vision Zero Action Plan. During this meeting, planning staff provided an overview of the Action Plan and projects Eugene Public Works is working on to meet Vision Zero goals. Also included in their presentation, staff discussed some of the next steps for the city’s Vision Zero Program. We’ve outlined some of those action items below, and look forward to a more robust public engagement campaign. We are also planning to advocate for hiring a dedicated Vision Zero coordinator that can oversee the implementation of this 5-year action plan. Read on for a preview of some of the developments we can expect in the coming months:

Speed limit methodology –  The City of Eugene is working with ODOT to amend the Oregon Administrative Rules to put new speed methodology in place that addresses how all users in the transportation system interact when establishing speed limits. Additionally, there are a few bills at play in the legislature that would authorize local agencies to set speeds. Eugene is supporting HB 2702 and SB 558 – the Safe Routes Partnership has also submitted testimony in support of these measures, which would make meaningful changes for how speed limits are established.

Increased capacity – The City of Eugene plans to use new state funding from the 2017 transportation package to fund an additional FTE in public works that focuses on crash data analysis and coming up with solutions.

Reporting  – Eugene Public Works will provide annual reports on the city’s progress in meeting Vision Zero goals. Additionally, they’ve established the following benchmarks to keep the city on track for achieving zero deaths and life-changing injuries by 2035: 25% decrease by 2023; 50% decrease by 2028.

Interactive mapping – Community members are invited to use the Vision Zero Interactive Map, to identify and report transportation hazards and dangerous traffic behaviors that could lead to fatalities or life changing injuries on Eugene streets. Information reported will be used by the City’s Public Works staff to assist in identifying patterns, problems and prioritizing work.

Looking to catch up on our work from over the years?