Taking a Stand Against Street Harassment

Catcalling, leering, whistling, persistently asking for a woman’s name as she walks down the street – these are all forms of street harassment. Street harassment happens every day.  When people experience street harassment, they often shrug it off, unsure of how to respond and not wanting to make a big deal out of it. But street harassment is a form of harassment and can affect people’s comfort, stress, and behavior, whether they are conscious of it or not. One woman might start wearing sunglasses and headphones as a barrier, pretending to not see or hear the person making the inappropriate comments or gestures. Another might avoid walking down certain streets or waiting at certain bus stops, making the trip to school, work, and other places more time-consuming and unpleasant.  And other people make choices that affect their quality of life and their health, avoiding making trips altogether, or driving instead of walking. 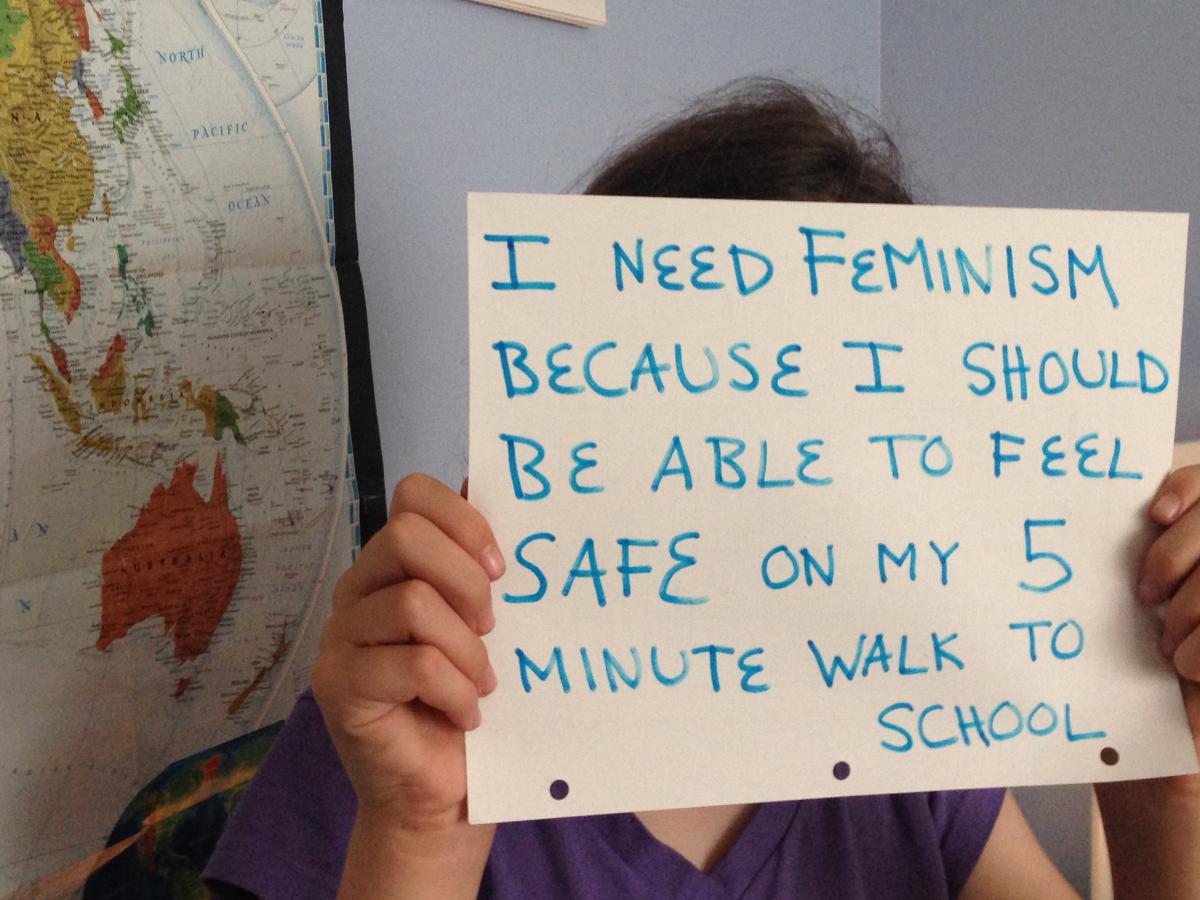 While researching the threats that children face along the way to school for the Safe Routes Partnership’s recent publication Taking Back the Streets and Sidewalks: How Safe Routes to School and Community Safety Initiatives Can Overcome Violence and Crime, the statistics on street harassment jumped out at me.  According to a national survey conducted in 2014, 65 percent of all women and 25 percent of all men have experienced street harassment.  Half of the women who have experienced street harassment were first harassed when they were less than 18 years old. A higher percentage of LGBTQ-identified men than heterosexual men reported being harassed and the most common form of harassment is homophobic or transphobic slurs. People of color, low-income individuals, and people identifying as LGBTQ experience street harassment far more frequently. We talk with our kids about “stranger danger,” but are we talking to our kids about street harassment? Probably not very often. And it is rarely, if ever, addressed in our Safe Routes to School educational programs. We are missing a chance to teach boys not to engage in this behavior and to give all students tools that help them respond and assure them that street harassment is not their fault.

We recently had the opportunity to talk with Holly Kearl, Founder and Executive Director of Stop Street Harassment (SSH), a nonprofit organization dedicated to documenting and ending gender-based street harassment worldwide, about this important issue.

We asked Kearl what local communities and parents should do to address street harassment that affects our young people.  Kearl responded, “I would suggest they create a safe space for youth to talk about it as a first step. For one thing, the youth may never have had a place to talk about what they experience and so it can be really important to give them a chance to do so and to know they are not at fault or alone in those experiences. And second, this can help the parents have a better sense for what the problem looks like in their community.”  As Kearl explained, “Once parents have better sense for the kinds of harassment youth are facing, where, and when, they can create a more targeted plan to address it.” Examples include strategies like discussion groups, writing or art projects, or some of the very tools like walk audits and mapping that are already used in many Safe Routes to School programs.

Kearl mentioned anti-street harassment campaigns like the one lead by the Rogers Park Young Women’s Action Team, that are empowering youth to raise awareness and make changes in their communities. Campaigns in Boston, Philadelphia, and Washington DC are aimed at addressing the harassment that occurs on public transit.  A video produced by Cosmopolitan magazine showing men’s reactions to their girlfriends being catcalled recently went viral. The growing number of initiatives across the country shows that communities are starting to take a stand against street harassment, but there is much work to be done in terms of integration into walking and bicycling programs and research so that we can better understand what is effective in stopping street harassment.

Is your community addressing street harassment? If so, send me an email. As we work to advance safe walking and bicycling to foster the creation of livable, sustainable communities, we want to hear about how your initiative addresses street harassment or other challenges that can create a different experience for girls, students of color, or LGBTQ students.