The Safe Routes Partnership is proud to announce Nora Cody as the winner of the 2016 Hubsmith Safe Routes Champion Award. Nora exemplifies the same qualities that marked Deb’s career as a leader of the Safe Routes to School movement. Like Deb, Nora is deeply committed to ensuring that kids can walk and bike to school safely and leading the movement for a true culture shift. 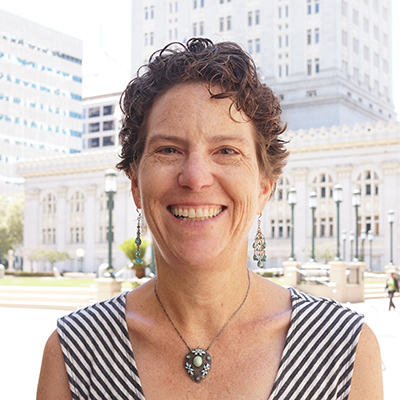 If you’re talking to someone who works with or knows Nora Cody, it’s almost inevitable that you will hear about Goldie the Golden Sneaker Fairy. Goldie is the mascot of Alameda County Safe Routes to School’s annual Golden Sneaker Contest, and as community partners, staff, parents and teachers will tell you, it’s not uncommon for Nora to be seen spray-painted in gold from head to toe, wearing the Goldie costume that she sewed herself.

“The Golden Sneaker contest is the event that I most look forward to each year,” said Nora. “It’s the most effective thing we do as far as changing behavior in the long term. The mascot, Goldie, makes a huge difference. It has created such goodwill not just among the kids, but also the teachers, parents, and principals.”

Goldie is just one of the ways that Nora, who serves as Program Director for Alameda County Safe Routes to School, overseeing program planning, nine staff, and a budget of nearly $1 million, continues to demonstrate her commitment to the nuts-and-bolts, day-to-day work of Safe Routes. Goldie embodies Nora’s philosophy that the champion model – inspiring and creating champions at the school level – is the most effective way to truly achieve a culture shift and long-term behavior change. 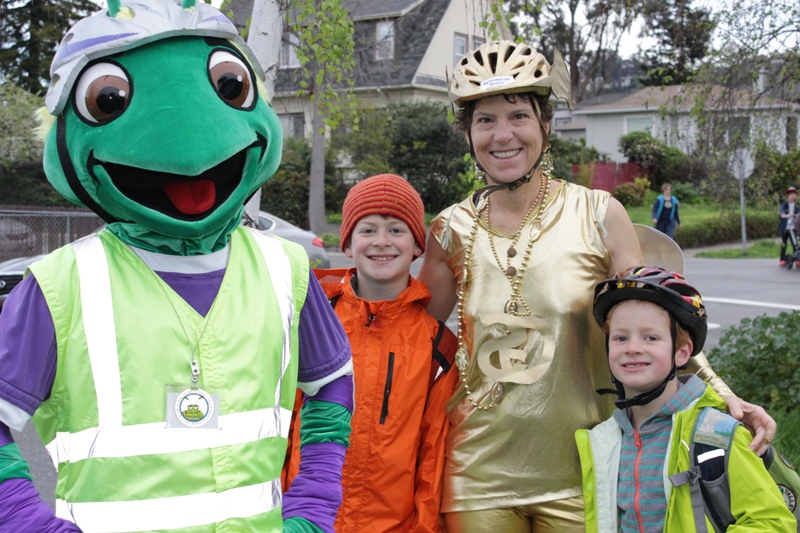 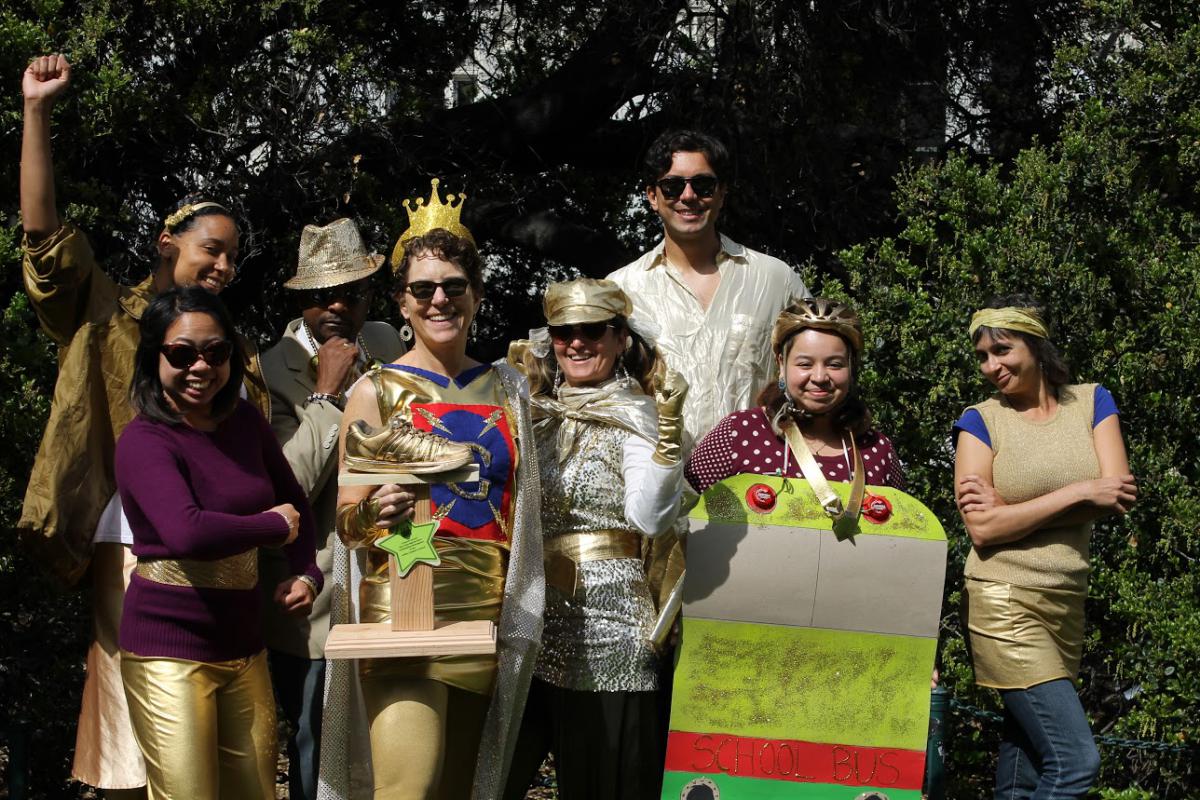 Nora makes an appearance as Goldie each year during the Golden Sneaker Contest.

In the nearly ten years that she has been leading the Alameda County Safe Routes to School program, Nora has overseen the expansion of the program from 2 schools to more than 160 schools in 15 school districts and has built a broad network of Safe Routes to School champions that includes advocates, public health staff, city and school district officials, parents, teachers, and students.

Before Nora was hired by TransForm to oversee the Alameda County Safe Routes to Schools program, she had been working for the Oakland Unified School District to implement state and federal health education mandates. She was well-versed in the language of public health and connecting with schools, but new to transportation planning and walking and bicycling advocacy.

“Fortunately, I had the opportunity to attend the first Safe Routes to School National Conference in Dearborn, Michigan, two months after I started the job. It was hugely beneficial – it was like getting a year’s worth of professional development experience in a few days,” said Nora.

From there, Nora launched what would become one of the most successful and effective Safe Routes to School programs in the country, creating a model that communities across America would emulate. In its first year, the program expanded from 2 to 30 schools. Nora hired 2 other staff and developed relationships with community partners that would prove critical to the program’s success, particularly in reaching underserved and low-income communities. 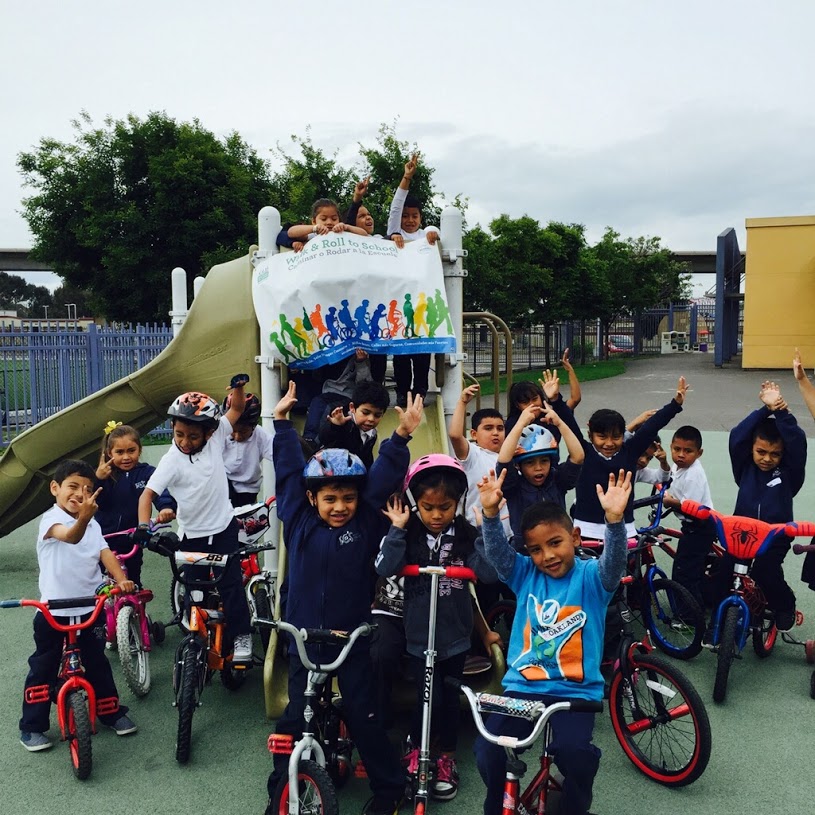 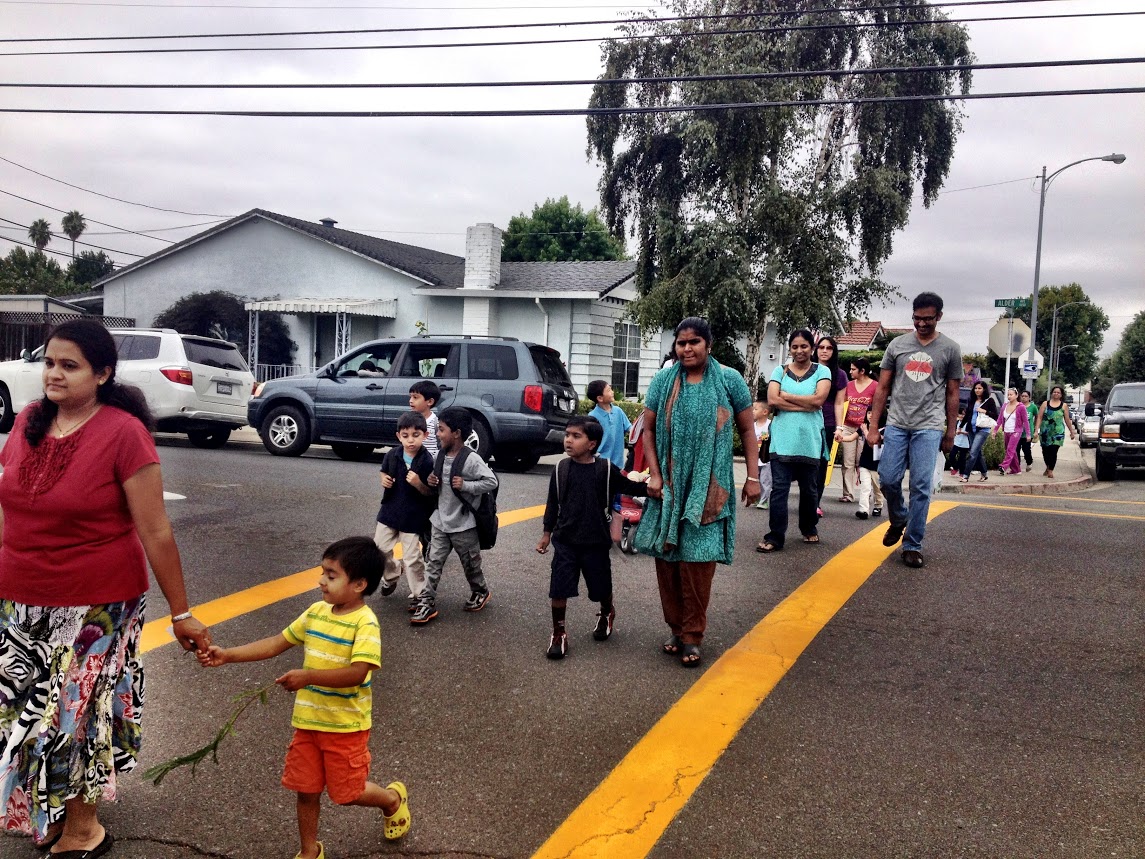 Alameda County Safe Routes to School is active in 160 schools in 15 districts.

“We’ve worked with partners from the very beginning, including the Public Health Department, Cycles of Change [a local nonprofit that does bicycle education programming], elected officials, law enforcement, city staff, and community-based health groups. We understood that we would be a lot more successful developing Safe Routes to School programs at new schools, particularly in low-income communities, by partnering with groups that are actively involved and have a lot of credibility in the community.”

Nora’s commitment to equity has underscored her career with Alameda County Safe Routes to School. This commitment is also illustrated in the partnership she initiated to expand the program to every low income elementary school in the Oakland School district – a district of 37,040 students at 118 schools where 47 different languages are spoken and 71.4 percent of students receive free and reduced lunch. Nora led this collaboration with the city of Oakland and the district’s wellness program and successfully acquired funds for a comprehensive Safe Routes to School program called Be Oakland, Be Active.

Nora’s approach to expanding Safe Routes to School through the champion model allows the program to consider and respond to the unique needs and interests at each school, particularly in low-income and underserved communities. Nora’s team has cultivated hundreds of knowledgeable Safe Routes leaders, in turn influencing their peers in ways only they can.  Many of the champions are bilingual and have emigrated from all over the world. The champion model even goes a step further, by developing the next generation of Safe Routes leaders; at the middle school and high school levels the students themselves take ownership of event coordination and activities.

Sometimes this champion model leads to exceptional outcomes. Take the example of Elyse Chadwick, a parent champion at an Oakland elementary school. Elyse was so inspired by the volunteer work she collaborated on with Nora, that when her family moved out of Alameda County, she sought paid work to continue to foster healthy transportation choices for youth. Today, she is the Safe Routes to School Coordinator for Elk Grove Unified School District in California.

“It was my positive experience working with Nora and TransForm that led me to my current work,” said Elyse. “I have seen firsthand how Nora’s tireless enthusiasm for active transportation buoys volunteers – the base of all successful local Safe Routes to School efforts. She always made herself available to attend school-site events and to help with even the minutest of program details. Nora is realistic about making incremental changes to increase walking and biking rates, and she successfully tailors her outreach to the specific demographics and context of each school environment.”

Community partners appreciate Nora’s continued dedication to engaging directly with schools. As Dario Hunter, who works with the Alameda County Health Department, wrote, “A quality I have always admired in Nora is her willingness to roll up her sleeves and help with the programs she designs and administers. From leading walk audits to speaking at conferences she truly puts her heart and soul into this cause of reducing obesity and increasing pedestrian and cycling safety through the introduction of Safe Routes to School principles,” he said. 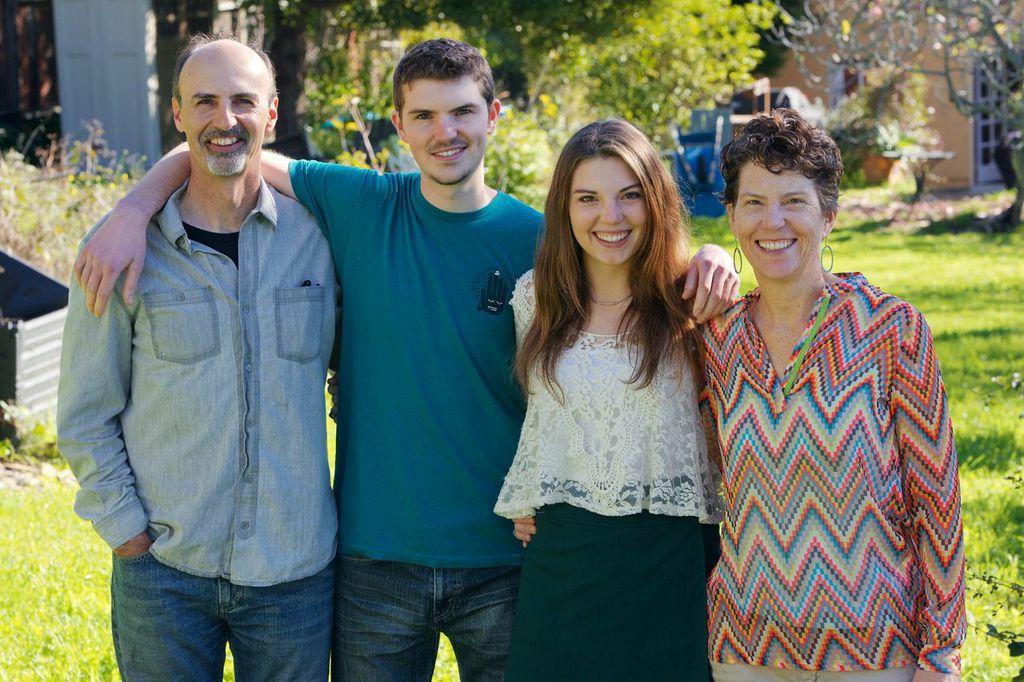 Nora with her family.

Nora was fortunate to know and have been mentored by Deb Hubsmith herself. Deb shared her thoughts on strategy, her insights on bringing together the right stakeholders and elected officials for strong and lasting Safe Routes programming that continues to grow today.

“My vision for Alameda County is that eventually we’ll be in every school in Alameda County that wants us, and that we will see a true culture shift where the norm is walking, biking, and taking transit rather than driving,” said Nora. “I would also like to see us go more deeply into the schools. We’ve had rapid growth and expansion, which is a really powerful thing, but it can also be a challenge not to spread yourself too thin. I’d like to see us focus more on walking school buses and bike trains and the day-to-day norm of walking and biking, rather than just the big splashy events.”