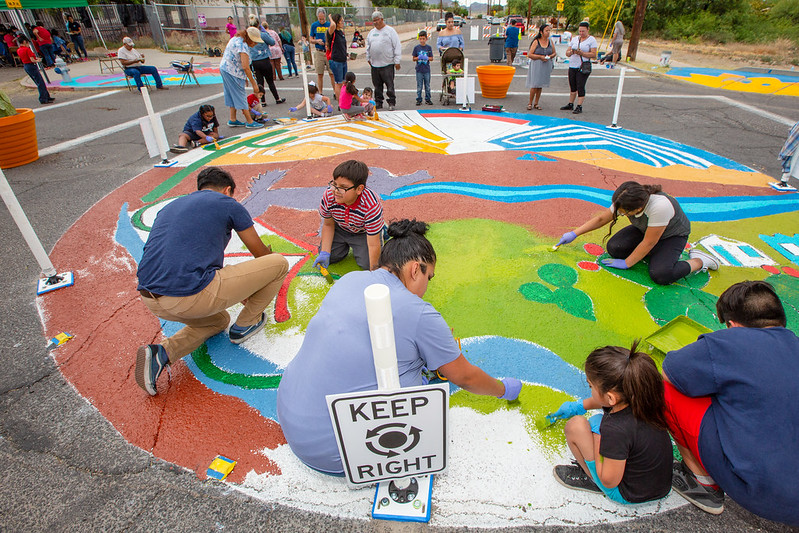 This spring, children, parents, grandparents and neighbors in the City of South Tucson came together to beautify and enhance their school crossing at Mission View Elementary School.  Painting howling coyotes, desert sunsets, smiling suns and cactus, families transformed asphalt and sidewalk into a colorful canvass of symbols and imagery that celebrates their community. The art creates a sense of place and a welcoming space, while the flex posts, reflective pavement markers, and large pots filled with native plants surround the large intersection mural to delineate a traffic circle, slowing down drivers and creating a safer crossing for people on foot and bicycle.

In this close-knit school community, many families live in the nearby neighborhoods, however, with no crossing guard and no designated school zone, parents are nervous to let their children walk or bike alone.  With the school located on the future 8th Avenue Bicycle Boulevard and the recently paved El Paso Southwestern Greenway only steps away, there is a lot of potential to conveniently connect families who are biking and walking to Mission View Elementary and other nearby destinations. Safe Routes to School
Tucson, which is a program of Living Streets Alliance (LSA) in partnership with the City of Tucson, led several parent meetings earlier in the school year. The team conducting walk-abouts and traffic observations with parents and neighbors which fostered opportunities for families to discuss their concerns and identify areas around the school in need of safety improvements. 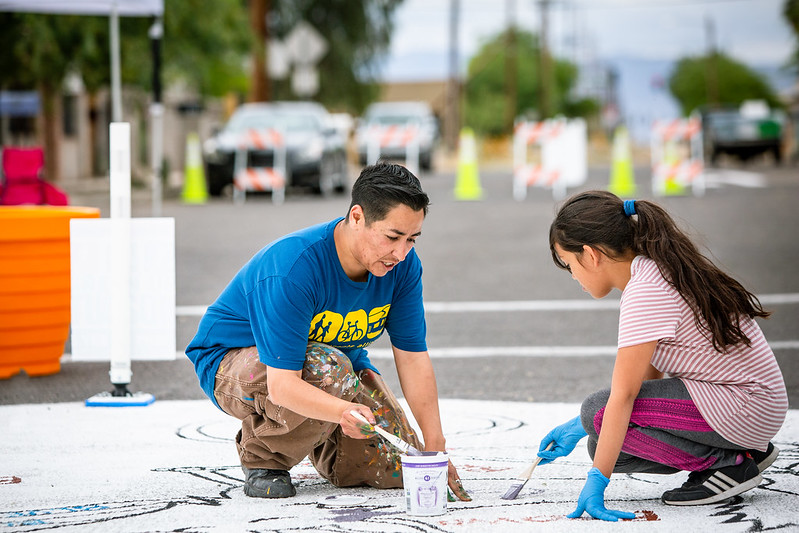 During the recent block [painting] party, families were hard at work, down on hands and knees painting the street, but it was a festive atmosphere as Elvis Crespo and other throwback hits filled the air. Older residents set up their lawn chairs to watch as their grandchildren played in the street, riding bicycles and tip-toeing around swathes of wet paint. One neighbor bringing out her own broom, gently swept the sidewalk area she had just painted and commented how healing it was for her to be out in her community in this way. Kids swarmed the paint station, chiming in unison for “more paint! more colors! more brushes!” As organized chaos ensued, it was inspiring to takea time-out to watch the smiles grow on children’s faces and adults enthusiastically commenting, “we should do more of this!”

In the weeks after the project, the LSA team, together with the school collected feedback from families to understand the impact of this project both in how it has changed traffic flow, as well as how it has shaped community perceptions of walking and biking in their neighborhood. The project received overwhelmingly positive feedback with many families remarking not only on how well the traffic circle serves to calm cars, but also the importance of bringing out the community to implement it, elevating a sense of community and ownership.

Huge thanks go out to all of the partners who brought this people-powered-project to life: the students, families, faculty, and neighbors of Mission View Elementary School, Mel Dominguez, The City of South Tucson, City of South Tucson Police Department, Cicli Noe, Psomas Tucson, Tank’s Green Stuff 100% Organic Compost, Creatista Films, Video and Photography, Speedy Striping Inc., Pima County Health and Pima County Natural Resources, Parks and Recreation, Trees for Tucson, and City of Tucson Bicycle and Pedestrian Program. Thanks also to Vitalyst Health Foundation AZ who helped make this all possible via one of their Innovation Grants.