IT'S ALIVE!: Ohio's Safe Routes to School is ALIVE, ACTIVE and AWESOME!

Since the passage of the new federal Transportation bill (MAP-21) on July 6, I have heard “Oh, isn’t Safe Routes to School dead?”

The answer is a resounding NO!

After October 1 (when the new bill goes into effect) Safe Routes to School projects can remain eligible, if state of Ohio officials and/or qualifying local metropolitan planning organizations decide to continue funding this program. However, Safe Routes will no longer have dedicated funding – it will come from a pot now called Transportation Alternatives, which also includes Transportation Enhancement, Recreational Trail and other road project use projects. And, not only will the total available funds be decreased by 30 percent and the number of eligible programs competing for these funds increased, but state will have the power to waive half of its Transportation Alternatives money.

The Safe Routes Partnership is working hard to Ohio to keep Safe Routes to School an active Ohio program, keep our state SRTS Coordinator and not divert funds to non-bike/ped projects. To learn more about the changes, read the America Walks bill comparison article and our director’s blog, Moving Forward on Safe Routes to School: It’s All Up to Us.

In Ohio, $16 million dollars of awards were just announced by the Ohio Department of Transportation in May, bringing the total Safe Routes to School awards in Ohio to over $48 million dollars since 2004.  Over the years, Ohio Safe Routes to School has affected 485 schools in 75 counties, improving safety, connectivity and education of approximately 200,000 students. A new study released by Pediatrics concluded that “active commuting to school may reduce the risk of obesity” in high school students and “obesity prevalence would decrease by 22 percent if adolescents walked/biked to school 4–5 days per week.” Keeping Safe Routes to School active provides youth with the opportunity to have active, healthy habits.

Here are just two examples of innovation and creativity that will help increase physical activity and reduce obesity rates among Ohio youth:

Peebles Elementary School, Adams County: Located in Peebles, Ohio, the number of overweight/obese third graders increased from 31 percent in 2004-05 to 48.8 percent in 2009-10. Safe walking/cycling access to the school was limited. Through a Safe Routes to School project completed in May 2012, 44 percent of students now have a safe, accessible path to walk or bicycle to school, thus increasing their daily physical activity. 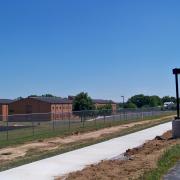 Cincinnati Public Schools- Safe Routes to Schools program just completed the first large-district school travel plan in Ohio! This plan encompassed all elementary and middle schools in the Cincinnati Public School District and once implemented will effect nearly 25,000 students in the Cincinnati area. In Ohio, a school travel plan is a written document that outlines a community’s intentions for enabling students to engage in active transportation (i.e. walking or bicycling) as they travel to and from school.

AND GET ACTIVE YOURSELF! Help improve and expand policies for Safe Routes to School, Complete Streets and joint-use agreements in Ohio supporting pedestrian and bicycling safety, connectivity and education at the state or local level - join the Ohio Safe Routes to School network by emailing me at kate@saferoutespartnership.org. An Ohio Safe Routes Action Plan will be unveiled in the near future, and welcome creative and enthusiastic folks to help make Ohio a leader in creating healthy, connected communities!