May is the last month of the school year for many Southern states, and one where we see great numbers of children actively commuting to and from school.  Maybe there are so many people walking and bicycling because the weather is so nice, or maybe because teachers and parents want an outlet to that pre-summer energy the kids seem to have bundled inside them!  Regardless, walking and bicycling to school are great ways to enjoy the outdoors in our Southern state as well as get some much needed physical activity. 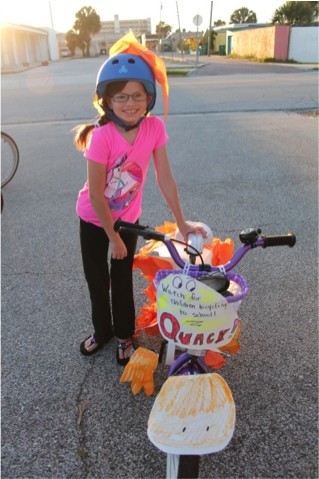 I remember as a child, summers were spent on my bike.  I would ride to see my friends, we would plan group trips to the local convenience store to get an icee or cold drink, and take the long way back home, just because.  We would ride the trails behind our subdivision when it was too hot to be on the road, spending the day active and free to explore the neighborhood.  I didn’t realize it then, but these fun, bike riding summers helped me stay active and fit.

The U.S. Department of Health and Human Services recommends 60 minutes or more of physical activity daily, and includes active transportation to and from school as a strategy to increase physical activity in their midcourse report.  In Florida, we had almost 150 Bike to School Day events registered on walkbiketoschool.org in early May 2014, which was almost double the number of events registered in 2013.  The events ranged from Gulf Breeze Elementary School in Gulf Breeze, Florida (West), over to Jacksonville, Florida (East), down through the Central part of the State, and on to the South and Homestead, Florida.

One particular area of the state that had a large number of events registered was the central, west coast of Florida where the Space Coast Transportation Planning Organization (TPO) is based.  According to Kim Smith, Bicycle/Pedestrian Safety Education Coordinator at the Space Coast TPO, there were approximately 34 events registered for Bike to School Day, which is an increase from the 20 registered last year.  Events were promoted through a number of avenues including, advertising Bike to School Day in a school newsletter, conducting a bike safety rally, and a group ride from a designated meeting location. One school in particular conducted a bike decorating contest which the children titled Quacktastic! Brevard County Public Schools helped promote Bike to School Day through their Facebook page and also through the district website.

Thanks to everyone for a successful Florida Bike to School Day 2014 and for keeping Florida kids active and safe!