This blog post was written by Margaux Mennesson and Colby Takeda. 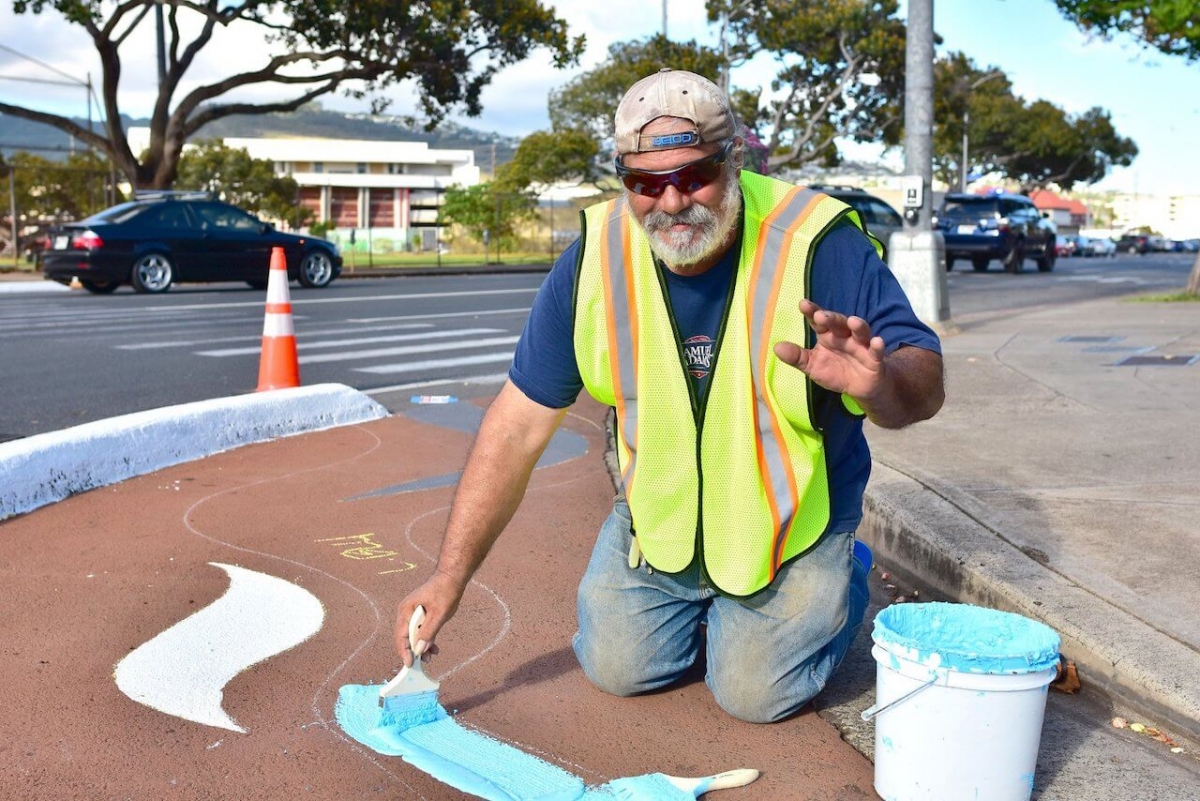 Blue Zones Project Hawaii, artist Luke DeKneef, the Safe Routes Partnership, and community members painted bulb-outs  (also called curb extensions, which extend the sidewalk into the parking lane to narrow the roadway and provide additional pedestrian space) at the intersection of Isenberg and South King Street, a site that had 67 car, truck, motorcycle, and moped crashes between 2007 and 2016 – including 20 involving pedestrians. The goal of the project was to use the artwork to slow vehicle speeds and improve visual appeal for people walking in order to improve accessibility to Old Stadium Park. This was the first community-led street treatment project on the island of Oahu, and it now serves as a model for future projects being planned in other communities.

Old Stadium Park: of the McCully-Mōʻiliʻili Neighborhood of Honolulu

Old Stadium Park is an 8.5 acre public park in the McCully-Mōʻiliʻili district of Honolulu (population 953,207). Originally built as an events stadium in 1926, the venue hosted professional sports games and musical concerts until the 1970s. The park’s location is historically important and meaningful to the community, as numerous significant sports events, races, and rodeos took place there throughout the 1920s-1970s.

In 1977, the stadium was demolished and a public park was built in its place. The park is surrounded by trees that provide shade, with an open field for activities and a playground. For decades, the park has been a gathering spot for family picnics, cultural events, group fitness activities, and intergenerational relationships. In the surrounding neighborhood, there are also two community gardens, four schools, and seven other parks that are frequently visited by community members.

However, traffic and pedestrian safety have long been a major concerns for residents, especially given the demographics of the neighborhood. The McCully-Mōʻiliʻili district has one of the largest older adult populations in Hawaii, with 35 percent of residents over the age of 50. The neighborhood also has a disproportionately low median household income of $46,000, which is more than $20,000 less than neighboring zip codes. The neighborhood has a large Asian community, making up 56 percent of the population. The Pacific Islander community is rapidly growing.

A Community-Led Solution: Making it Safer to Walk to Old Stadium Park

Since 2017, Blue Zones Project* has been working on revitalizing Old Stadium Park to better support the recreational needs and interests of the community. Blue Zones Project was launched in the neighborhoods of Mānoa, Makiki, McCully, and Mōʻiliʻili (also known as 4M) in June of 2017, and Old Stadium Park was unanimously identified by neighborhood residents, Blue Zones Project staff, and community leaders from all parts of 4M as the project with the greatest potential to improve lifestyles by serving as a hub for physical activity, access to healthy food, and intergenerational social connections.

With a deep understanding of the culture of the 4M community, Blue Zones Project made a pledge in 2017 to work closely with community leaders and partner organizations to transform Old Stadium Park for the benefit of all park users. Blue Zones collaborated with over 25 community organizations, including businesses, faith-based groups, nonprofits, and schools, to assess concerns and interests and generate ideas to revitalize the park. Since the launch of the initiative, thousands of people have contributed their time and energy to park clean-ups, a community survey, and other community advocacy meetings and activities.

With Blue Zones Project’s advocacy and the leadership of Council Member Ann Kobayashi, the Honolulu City Council passed Resolution 18-225 in late 2018, requesting the city prepare a master plan for Old Stadium Park, and in June of 2019, $250,000 in City funds were allocated towards developing the park’s master plan.

In 2019, Blue Zones Project received a Safe Routes to Parks award from the Safe Routes Partnership that provided customized technical assistance and a grant of $12,500 to improve safe walking and rolling access to local parks. Blue Zones Project used this additional support to continue their work to revitalize Old Stadium Park, and to plan a series of early actions that would energize the community around activated spaces in and around the park. The timing of the Safe Routes to Parks award coincided with the City’s budget hearings, which proved to be critical in demonstrating to City leaders that the community was invested in improving safe park access and that financial support from the City was backed by hundreds of residents.

In June of 2019, Blue Zones Project organized a five-day series of park engagement activities, including guest speakers, a walk audit, brainstorming sessions, a park clean-up event, and a community-led painting of bulb-out crosswalks at the entrance to the park. At the end of the series, Blue Zones Project hosted a park pop-up event with healthy snacks, a park clean-up, free Biki (public bikeshare) bike rides, and a yoga class.

For the bulb-out painting event, Blue Zones Project worked with a local artist, Luke DeKneef, to create a design with significant input from the community. Over three days of workshops, residents discussed the history of Mōʻiliʻili , traffic calming, urban tree canopies, and the role of art in placemaking and placekeeping. The design features caves that run underneath the surface of the park, native fish that swim in local waters, and the water where the mountains of Hawaii meet the sea. 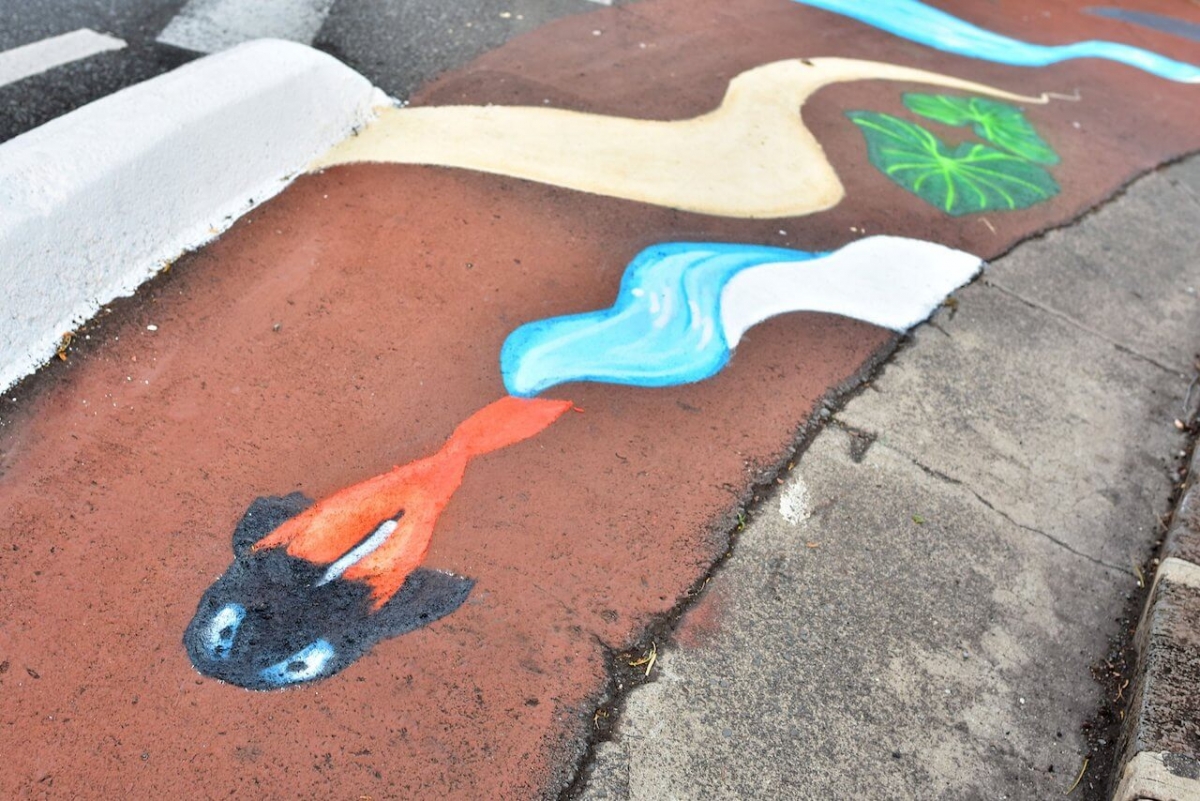 “Painted bulb-outs greatly serve the Mōʻiliʻili neighborhood by highlighting the street’s unique traffic calming treatments, improving the visual aesthetics of the intersection, and featuring culturally relevant artwork co-designed with local youth and seniors,” said Colby. “Our volunteer team also re-painted the curbing at this intersection, which were blackened by years of tire marks.” 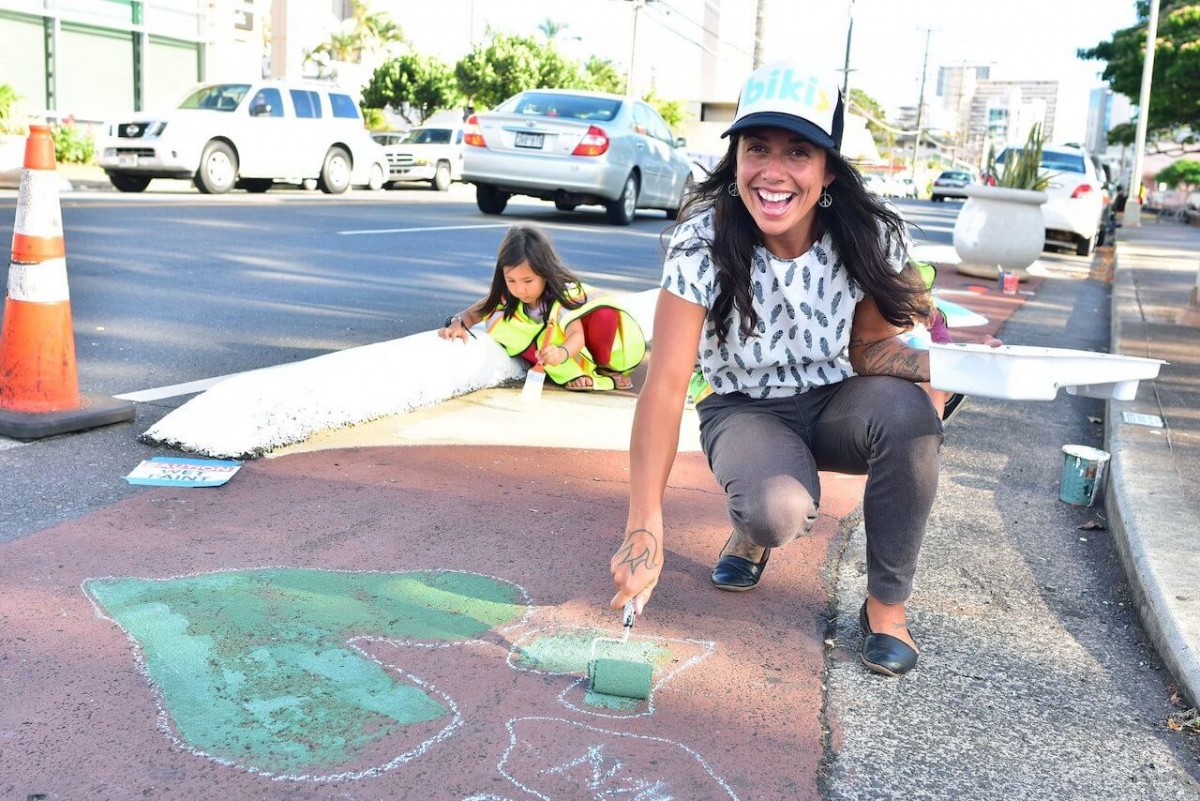 “Over the course of five days, we welcomed over 140 volunteers, including middle school students from a local school, AARP volunteers, and families of victims of traffic violence to our design workshops, intersection curb and bulb-outs painting days, and park clean-up, and more than 80 community members joined us for our park pop-up event. We continue to get compliments about the artwork at the intersection and have already presented this project at conferences and on various webinars,” said Colby.

“The community learned alongside us, and since then they’ve created this framework that’s allowed community groups to come in and do their own projects we’re doing another painted bulbouts project,” said Colby.

The Department of Transportation Services had never had a community group lead a project like this before. “When we started asking questions they didn’t know the answers – permits, liability, insurance, this form or that form. They were learning alongside us. Every time I talked to someone, they gave me different answers and it helped me learn who does what and who reports to who and who gets approval for things like street trees or median projects,” said Colby. The Department of Transportation Services and the Department of Parks and Recreation learned alongside Blue Zones Project. Going forward, Blue Zones Project plans to replicate the project in other places, with a much smoother process.

“A major barrier was understanding the complexities of working with public agencies and all of the processes and systems required for a project of this magnitude,” said Colby. “In the end, we obtained three different permits and needed the approval of three different city department and commissions. With very distinct timelines and requirements for each, having more insights into our government would have been helpful, but I enjoyed the challenge. However, now that we have gone through these processes, we are now equipped with the knowledge and skills to replicate this type of quick build project.”

The Future of Old Stadium Park

With funding now secured for a new Old Stadium Park master plan, Blue Zones Project will continue to work with their coalition of partners to ensure community voices remain prominent in the design process. The organization plans to continue hosting pop-up events at the park, reach out to new stakeholders, and explore policies and programs that can allow the built environment to better promote public health.

Blue Zones Project also recently entered into a three-year agreement, through the City & County of Honolulu’s Department of Facility Maintenance’s Malama** Program, to continue maintaining the infrastructure at the intersection of Isenberg and S. King Street. Plans are already in the works to have artists paint the planters at this intersection, which will be followed up with new plants. Additional work at Old Stadium Park will include a large-scale mural painted with the help of youth on a wall facing the park along S. King Street and installation of a FitLot fitness equipment station, donated by AARP.

How to Get Involved

An event is planned at Old Stadium Park in April to collect stories and hear from community members about priorities for improving the park in the future. Blue Zones Project also plans to paint and replant planters at the bulbout intersection during Climate Week 2020, with the theme of environment and biometrics.

“One of the original goals of this project was to use our efforts to help simplify future quick build projects for cities across the state and beyond. In a short period of time, and with minimal funding, passionate residents, and strong support from our elected officials, we were able to host a series of events focused on empowering our residents and allowing them to be part of community change. We encourage others to explore similar solutions in their neighborhoods and challenge city and state agencies to better integrate citizens and community groups in the planning and execution of projects.”

*Blue Zones Project is a community-led well-being initiative inspired by Dan Buettner, a National Geographic Fellow and New York Times best-selling author who identified five regions of the world—or Blue Zones—with the highest concentration of people living to 100 years or older. Blue Zones Project incorporates Buettner’s findings and works with cities to implement policies and programs that will move a community toward optimal health and well-being.

**Malama is the Hawaiian word for care/to care for.