Back to School in Milwaukie, Oregon, Adds Another E: Excitement

"It is just not safe to let my child walk or ride their bike to school." So said respondents from the initial survey that the PTA of Linwood Elementary in Milwaukie, Oregon, sent out last spring. They didn’t know that 'Safe Routes to School' – with capital letters – existed. But they knew something was not right, and they wanted to fix it.

"Safety is a common topic of conversation among parents and caregivers during the school day opening and closings," says Ane Roth, Linwood PTA’s vice-president. "There actually aren’t sidewalks, nor enough safe crosswalks around the school, and children have to walk or bike in the roadway with cars. That’s a scary thought for any parent."

Community members in this town of 20,000, located just six miles south of Portland, say that this is the way it has always been. In Milwaukie, parents report, instead of letting their children walk or bike to and from school and in their neighborhoods, the families and community living around Linwood Elementary suffer through traffic delays and congestion. Anyone on Linwood Avenue during school drop off and pick up times can see the many parents driving their children to school—many of them living only a quarter of a mile from the school.

How could Linwood Elementary parents make routes to school safe for students?
In the spring of 2014, however, something changed. A few parents started to question whether or not this was the way it had to be, and changed the conversation from a complaint to a question: How could we make the route to school safe for our children? 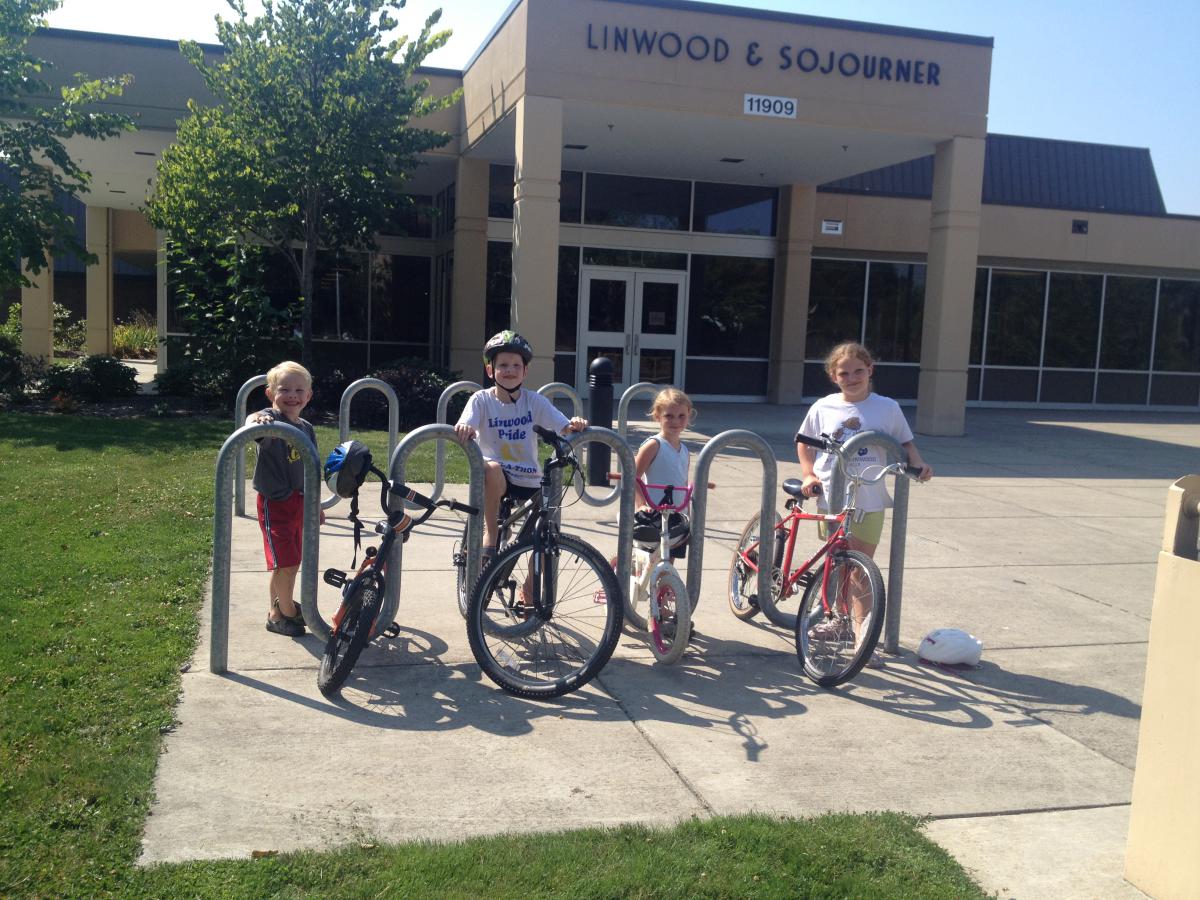 In essence, they were starting down the path of creating Safe Routes to School—they just didn’t know it. "We weren’t sure what we were going to do with the information, what to do next to actually make it safer," says Jessica Rinner, whose kids are seven and five.

Through their interest in making things better for their kids and the entire community plus their perseverance to find a way to do so, they heard about the Safe Routes Partnership’s work in the Pacific Northwest and learned what Safe Routes to School initiatives are and can do. The group quickly jumped on an opportunity for a small grant from the Oregon Department of Transportation, which helped them gather more information and turn it into a School Action Plan that will include all five E’s: education, encouragement, enforcement, engineering, and evaluation.

Another E: excitement
Linwood Elementary parents are particularly excited to be working closely with engineers at the city to find practical solutions to some of the on-the-ground problems around the school, such as speeding cars. "Oregon Safe Routes to School supplied us with an easy-to-use template that has given our project much more definition," explains Nicole Perry, PTA secretary and mother of two kids at Linwood. "We’ve invited more people to join our School Team, including several city and county officials, engineers, and planners. We formed alliances that we wouldn’t have thought of with transportation associations, including our School District [yellow school bus] Transportation Department. It’s been really exciting to see this idea grow in our community."

The City of Milwaukie is watching closely how this team works, and has plans to roll out Safe Routes to School initiatives at other schools in the city in the near future. The County is interested, too, and is already thinking about what could be done next – at a district-wide or county-wide level.

Meanwhile, the team plugs away at making their part of Milwaukie safer for everyone to get around on foot or by bike, including Linwood students; they have purchased equipment and prizes to encourage and help kids walk and roll to and from school, and they’re looking forward to back-to-school so they can get started. Roth, who also has two kids at Linwood Elementary, describes what they have in store for back-to-school: "We have reflective vests and stickers for the kids, and flags and cones for the existing crosswalks – we’re eager to get started right at the beginning of the school year to help our kids get more physical activity, safely."

What’s the best thing so far for the parents involved in this Safe Routes to School initiative? Says Roth: “That our combined hard work to build a diverse team and get community buy-in to make safer routes to school will positively affect the walkability and bikeability of our entire community, not just our school children.”